A 79-year-old disabled woman who was allegedly buried alive by her son has miraculously survived after being trapped in the pit for nearly three days, authorities have said.

Police in north-western China’s Shaanxi province rescued the paralyzed mother, known as Wang Mou, on Tuesday, May 5, after the woman’s daughter-in-law reported her missing.

The 58-year-old son, known as Ma Mou, has been detained and faces an attempted murder charge, according to the police. An investigation on the incident is underway.

READ  D!ck Is So Good & Sweet, Let Us Pay For It – Lady To Ghanaian Men.
Police in Jingbian County revealed that at 9am on Tuesday morning, the suspect’s partner Zhang Mou went to the Xinzhuang Police Station to report her husband had taken her mother-in-law out on a trolley around 8pm on May 2, but she had not returned.
She said he had told the family he had sent the pensioner, who cannot walk by herself, to visit relatives; but his wife became suspicious.
READ  OH GOD: Woman shares video of what Coronavirus testing in the US feels like (Video)
After bringing Ma in for questioning, investigators said he admitted dumping the elderly woman at an abandoned tomb in a forest south of Jingbian County.
After confirming the location, police immediately excavated the gravesite, and halfway through they heard a faint cry for help. They surprisingly found the paralyzed mother still alive after nearly three days without food or water.
READ  Coronavirus: Latest update from around the world 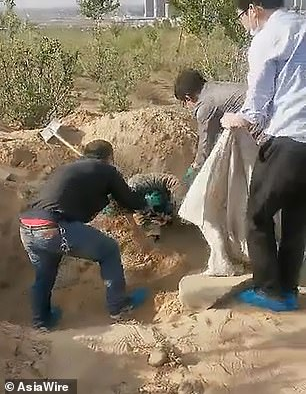 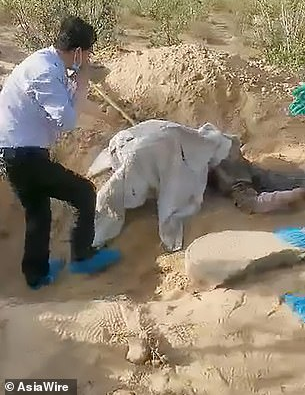 Meet the Indian man who prays to life-size statue of Donald...

Sawla DCE rescues another woman accused of witchcraft from being lynched

Election should be about ballots and not bullets – Ya-Na

Listing of Adentan AstroTurf in the NPP’s infrastructural achievements is an...

Hungry Slay Queen Who Has Been Collecting Money From A Mechanic...

Performance of Ghanaian Players Abroad over the weekend