One person has been rescued from the stern of a ferry that has been burning for three days, Greece’s coastguard said, as rescuers continue to search for 11 other passengers who are still missing.

Speaking to The Associated Press on Sunday, the coastguard said that the survivor, a Belarusian man, was found on the left rear side of the Euroferry Olympia in apparently good condition.

The news comes after the Italian-owned ferry, which was carrying more than 290 passengers and crew, as well as 153 trucks and 32 cars, caught fire on Friday, three hours after it left the northwestern Greek port of Igoumenitsa, on the mainland, bound for Brindisi, Italy.

About 280 people were evacuated to the nearby island of Corfu. One of two passengers rescued late on Saturday was not on the ship’s manifest and is presumed to be an asylum seeker – sparking fears that more undocumented passengers could also be missing.

The ship is being slowly towed to the port of Kassiopi, in northeastern Corfu, by three tugboats, authorities said. Firefighters were still battling the blaze, which, although confined in certain spaces, reignites from time to time, and thick smoke is hanging over the ship.

The extreme temperatures in some parts of the ship have impeded the rescuers – made up of the Greek fire service’s Disaster Management Unit and a team of rescuers from private operators – from searching the whole ship. The ferry is slightly listing from the tonnes of water that have poured into it, but authorities say it is not in danger of capsizing. 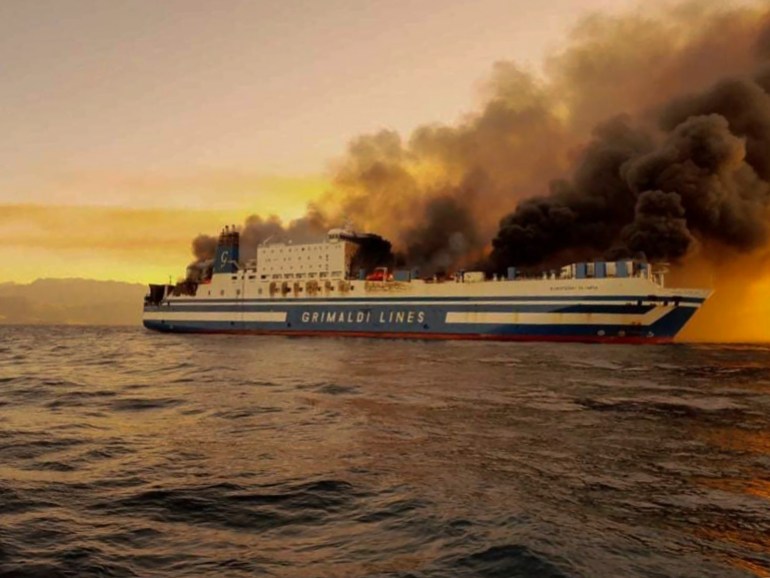 The Italian-owned ferry was carrying more than 290 passengers and crew, 153 trucks and 32 cars [Lazos Mantikos/AP]

A prosecutor on Corfu has ordered an investigation into the cause of the fire. The Italy-based company that operates the ferry said the fire started in a hold where vehicles were parked.

The ship’s captain and two engineers were arrested on Friday, but were released the same day, authorities said.

“We heard the alarm. We thought it was some kind of drill. But we saw through the portholes that people were running,” truck driver Karaolanidis told the AP on Saturday.

“You can’t think something at the time (other than) your family … When I hit the deck, I saw smoke and children. Fortunately, they (the crew) acted quickly.”

See also  How To Earn Interest On Crypto: Interest And Earnings

The missing truckers reportedly slept in their vehicles because cabins on the vessel were overcrowded.

Ilias Gerontidakis, the son of a missing Greek trucker, told the Proto Thema online newspaper the Olympia was “miserable from every point of view”.

“It had bed bugs, it was dirty, it had no security systems,” he said as he waited at the port for news. “It had 150 lorries inside. Normally it should have 70 to 75 cabins, but it only has 50. They force us to sleep four people in a cabin”, he said.

“My father, from what I was told, slept in the truck.”

The last shipboard fire in the Adriatic occurred in December 2014 on the Italian ferry Norman Atlantic. Thirteen people died in that blaze