Deputy Minister for Health, Alexander Kodwo Kom Abban, is now Deputy Communications Minister, according to a statement from the Presidency.

The statement dated April 6, 2020, and signed by Director of Communications, Eugene Arhin indicated that the transfer means that Vincent Sowah Odotei will no longer occupy his portfolio as Deputy Minister for Communications; his appointment has been revoked by the President.

To replace Mr. Kodwo Kom Abban is Dr. Bernard Oko-Boye, MP for Ledzokuku who will become the substantive Deputy Minister for Health after going through the vetting process and having been approved.

“The President thanks Hon. Vincent Sowah Odotei for his services to the country and wishes him well in his future endeavours,” parts of the statement read.

Here’s the full statement below: 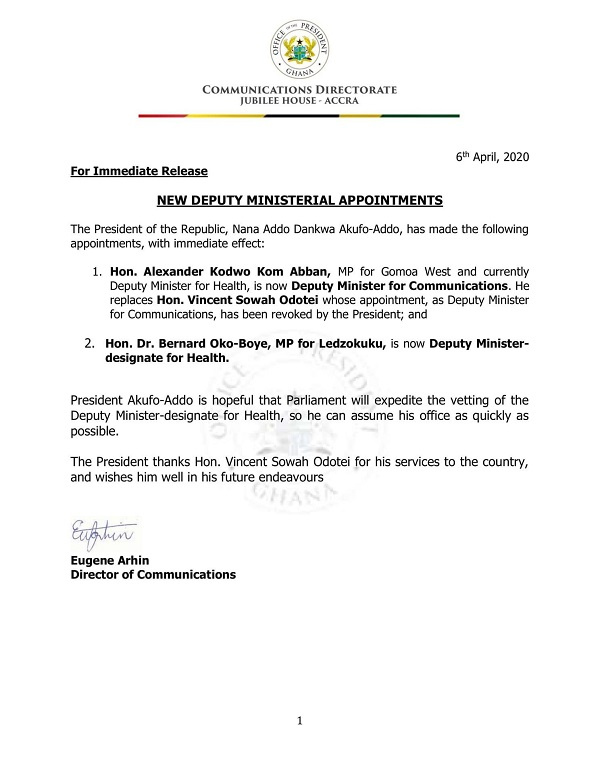 Sammy: Knust Guy Who Was Heartbroken By His Girlfriend, Nana Ama, Is Next On Date Rush, Watch Teaser Here – Watch Video

I got healed of the coronavirus after I took in bread...

WATCH VIDEO: Nothing Happened between me and sammy,,It was just soft...

Sammy Gyamfi uncovers why he dismissed NPP for NDC

Mining to finance NPP activities was to be done legally –...

Coronavirus: Accra markets to close down on Monday for disinfection exercise.