An Accra District Court has granted GH¢100,000 bail to founder and leader of International God’s Way Church, Bishop Daniel Obinim after he pleaded not guilty to all two charges leveled against him.

He was also granted bail with three sureties, one to be justified which left him in the police custody as at last night.

Angel Obinim has been charged with forgery of false documents and publication of false news contrary to sections 208 and 159 of the criminal offences Act 1960(Act 29) which he used against one of his former junior pastors.

The trial judge Rosemond Agyire granted the bail when the Lawyer of Obinim, Raphael Opoku Adusei told the court his client is innocent and not fit as he was admitted at the hospital last week.

Controversial Member of Parliament for Assin Central, Kennedy Agyapong alleged that, Obinim used the insignia of the Ghana Police Service illegally to declare one of his junior pastors allegedly stealing his money which was meant to be transferred to Spain to purchase some instruments.

Mr Agyapong, since the start of his exposé, has said he will not only strip Bishop Obinim off his glory but will also make the law deal with him.

He has also alleged that Bishop Obinim does not pay his taxes for the two guest houses in Accra and Kumasi.

Angel Obinim will re-appear before the court on June 1. 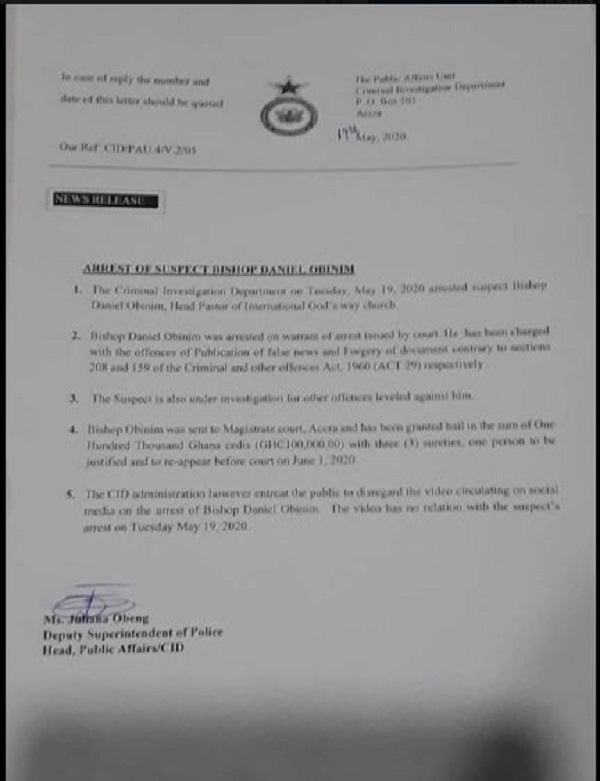 Video : Fameye Reveals The Main Reason He Stopped Going To...

Toddler Falls From Moving Car, Hit By Another Oncoming Vehicle

Wendy Shay can feed your entire generation – Bullet descends on...

I’ll transform Ghana in just one year as President – Mzbel