An aspiring Member of Parliament for Bongo, who is campaigning on the ticket of the New Patriotic Party (NPP), is allegedly hoping to ride on the popularity of the National Democratic Congress (NDC) presidential candidate, John Dramani Mahama, to secure a win on December 7.

Peter Ayinbisa, according to the incumbent Member of Parliament for the area, Edward Bawa, has been asking voters to vote for John Dramani Mahama for the presidential ballot and select him as the MP for the area during the parliamentary ballot.

This strategy, if true, is markedly different from the usual practice in Ghana where a parliamentary candidate projects his campaign while projecting that of the presidential aspirant of his party at the same time.

That is, unless the aspiring Member of Parliament is running as an independent candidate, he is expected by political party conventions and rules to even include the photo of the presidential candidate of his party in his/her campaign artwork.

However, images sighted by GhanaWeb of Mr Ayinbisa’s campaign artwork does not include the image of Nana Addo Dankwa Akufo-Addo, the President and the candidate for the governing NPP in the upcoming presidential election.

The matter was first mentioned during a radio programme on Friday, September 4, 2020, by incumbent MP for the area, Edward Bawa, who mocked his contender on the radio programme for “hiding his boss”.

“At the inauguration of the campaign team, banners displayed had only his images; until there was agitation against that by some members of the NPP at the event. The programme had to delay for over four hours – from 9 am to 2 pm – for a new banner with Akufo-Addo’s images to be printed,” Edward Bawa told GhanaWeb on the back of his revelation on the local radio station.

GhanaWeb checks reveal that the NDC since 1992 has always won the Bongo seat for both the Presidential and Parliamentary ballot, hence, Mr Ayinbisa may be adopting this novel strategy to clinch a win for himself.

When Mr Ayinbisa was contacted by GhanaWeb, he offered the following explanation:

“The allegations are unfounded. That is his perception. That is what he has sought to say…but there is no evidence anywhere to justify his claims.”

See also  Tema Motorway Interchange to be opened on Saturday, May 16

GhanaWeb then sent him images of his campaign launch, showing his banner without the image of the President, obtained from its sources.

Mr Ayinbisa subsequently sent GhanaWeb images as proof that his banner had the image of Nana Akufo-Addo.

In the images he sent, it appeared that the old image without Nana Akufo-Addo had been swapped with the new one with the President, confirming that there had indeed been an afterthought to change the banner.

Mr Ayinbisa has since not explained why the images were swapped when GhanaWeb put the question to him. 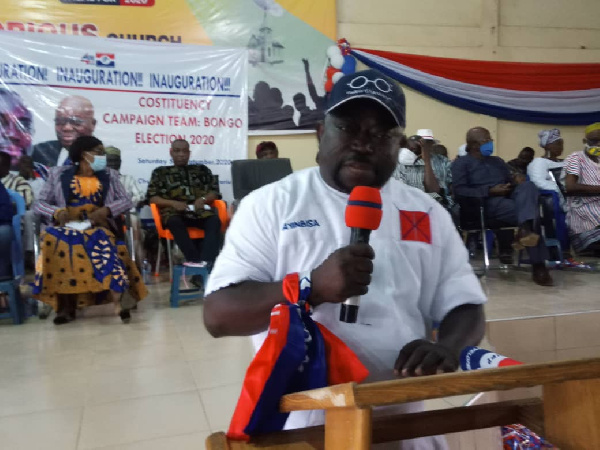 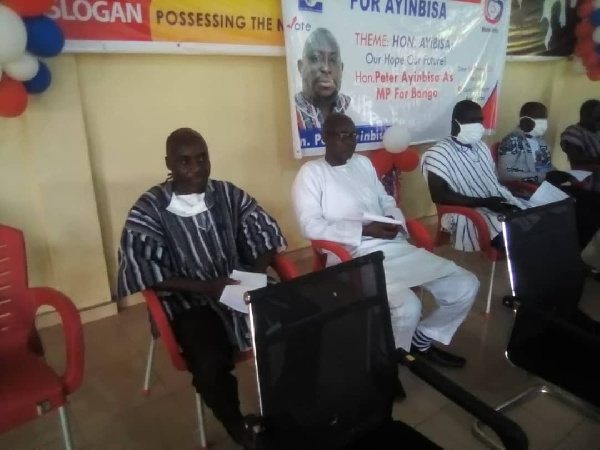