In the new photo posted by Moesha and sighted by Zionfelix, she spoke about being a memory and being forgotten or erased with time.

She made the post and immediately, many of her fans, followers, and even colleagues, started reading meanings into it.

READ  Hushpuppi has reportedly tested positive for Covid-19 in prison

It is yet to be known why the pretty actress decided to make such a post knowing full well that her page was ardently followed by teeming Ghanaians all over the globe.

However, recent checks made by Zionfelix has revealed that the actress has taken down the post but we have a screenshot.

We can only guess and conjecture that many people reached out to her to find out if she was fine after she made the post.

It appears the actress had been spoken to and told about the implications of the post she made and decided to take it down with immediate effect.

Moesha Boduong boasts of massive following on social media owing to the many jaw-dropping photos that she posts online.

She is also noted to be a huge brand ambassador and influencer who gets a lot of gigs due to her matchless work ethic. 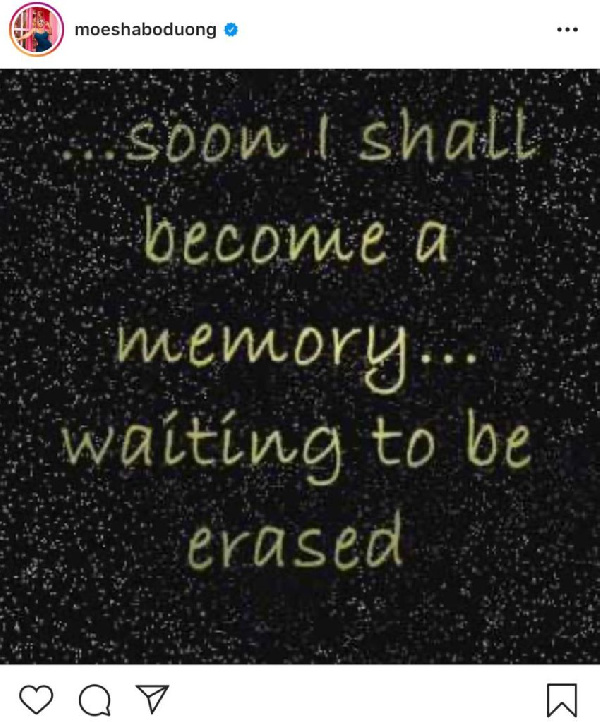 Men with huge manhood can be rude to women – Lydia Forson

Residents chase out their MP over failure to fulfill his pre-election...

Locks were changed to secure Domelevo’s office – Audit Service Board...

Judge threatens to free NAM 1 over lack of progress in...

John Dumelo To Donate 4,000 Laptops To Students In Ayawaso West

Sandra Ankobiah Savagely Replies A Fan Who Asked If She Is...