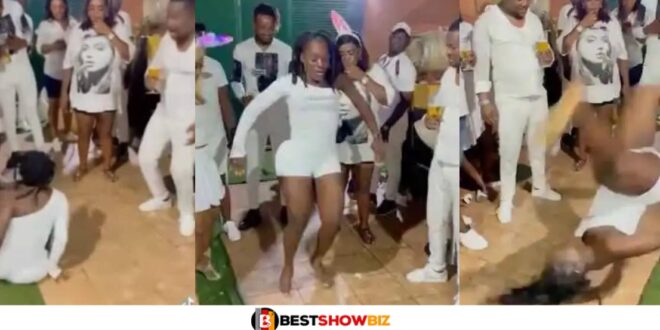 A video of a lady attempting to impress a group of people with her dancing ability elicited mixed reactions from social media users.

The hilarious video began with a barefooted lady in white doing some fast legwork in front of her small audience while grooving to a song playing in the background.

While dancing entails moving one’s feet or body rhythmically in a pattern of steps, netizens who saw the video thought the lady’s dancing was strange.

Aside from landing on her backside after a front flip, the lady also performed a superman flying move, landing face down.

On the aforementioned occasions, she would smile and pick herself up, continuing with her strange legwork.

Her small audience seemed to enjoy it every step of the way, as they never stopped cheering her on.

Check out the trending video below: