Major power outage experienced in some parts of Accra, Western, the middle and Northern parts of the country on Monday was as a result of disturbance in its power system says the Ghana Grid Company Limited (GRIDCo).

Power has however been restored to affected areas across the country.

“At 19:50GMT on Monday, 8 November, 2021, the power system experienced a significant disturbance. 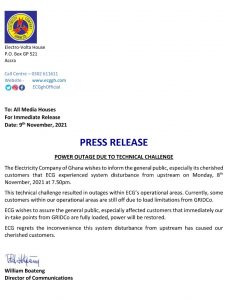 “All generating units at Aboadze Enclave and Bui tripped, resulting in a power outage in sections of Accra, the Western, Middle, and Northern parts of the country,” according to a press release from GRIDCo on Tuesday November 9, 2021.

The statement continued that “GRIDCo assures its valued stakeholders that it will continue to provide a stable power system for dependable and efficient power supply for national and economic growth.” 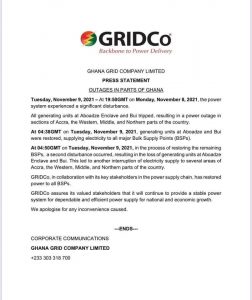 GRIDCo has since apologised to consumers for the inconvenience.

Meanwhile, Electricity Company of Ghana (ECG) has also apologised to consumers over the same situation by assuring customers of constant power supply.

All the predictions The Simpsons got right about 2021…

Omicron is spreading faster than any other coronavirus variant…

#YearOfReturn: Is Jay Z In Ghana?