Broadcast Journalist with Despite Media, Afia Pokuaa has hit back at critics who say she lied about the Health Minister’s reaction to reports that he was resting at the University of Ghana Medical Centre

Afia Pokuaa Saturday after reports were rife in some sections of the media that the Health Minister had tested positive for the disease said she contacted the Minister who said otherwise.

According to her, the Minister told her he’s resting at the University of Ghana Medical Centre

“Spoke to the minister of health. He says he’s fine and doesn’t have COVID but only needed rest and his usual medication.” She posted on her Facebook page.

But the President of Ghana, Nana Akufo-Addo in his eleventh address to the country confirmed that the Minister had contracted the virus and said he’s stable and responding to treatment.

“Let us also wish our hard working minister of health, Hon. Kweku Agyemang-Manu, a speedy recovery from the virus which he contracted in the line of duty. And he is in a stable condition,” he said.

Afia Pokuaa has come under severe attack on social media for propagating falsehood about the Minister and have been asked to provide an audio to prove that she spoke to him as she reported.

Reacting to the barrage of attacks, she posted a screenshot of her call log confirming that she received a call from the Minister after several attempts to reach him.

She called on Ghanaians to channel their energies in criticizing her to wearing facemasks because that’s the imperative at the moment.

She said “Called the minister a couple of times without answer to confirm the story that was making rounds. This was his return call to me. Let us use the same energy to WEAR OUR MASKS and protect ourselves”. 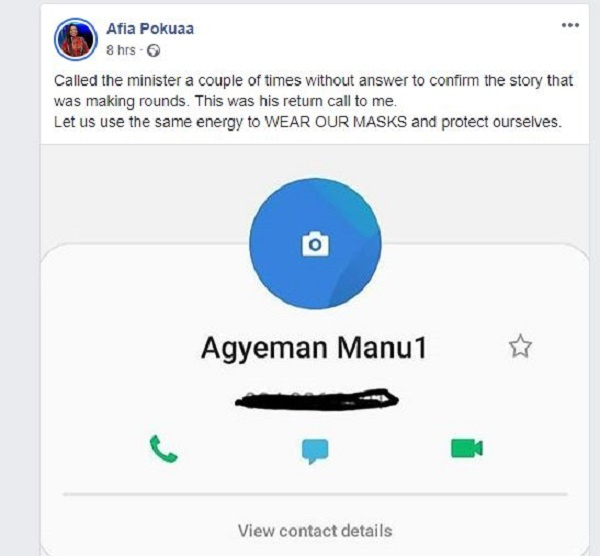 Gone but not forgotten: Valuable lives snatched from us by COVID-19

‘I Slept With Virgins For Money Rituals,’ – Former Super Eagles...

Your covenant with God is broken because you failed to build...

More fans for Akufo-Addo after latest address on coronavirus