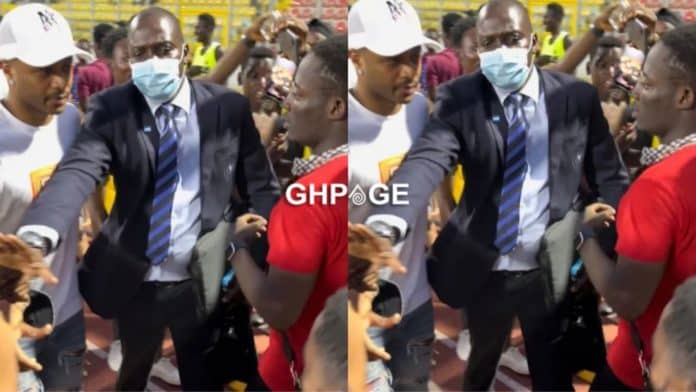 Earlier yesterday, the news went rife on the local digital space that Blackstars skipper Dede Ayew has been robbed of his 1.4 million watch.

This report was first broadcasted by Asempa FM’s sports crew who were present at the Baba Yara Sports Stadium when the captain stormed the sports facility center to wish the boys well ahead of Ghana’s game against Nigeria.

According to Asempa FM’s sports crew, Dede Ayew was mobbed by football lovers immediately he made entry into the Baba Yara Sports Stadium.

Some notorious hooligans who were present took advantage of the scenario to execute their planned agenda.

Some photos from the incident that has since gone viral on the internet capture the moment a guy in a red shirt was seen picking something which appears to be like a watch on the floor after it was supposedly stripped off Dede’s wrists.

Presently, we can’t tell if it’s the guy in the pictures who stole Dede’s watch or not but he has been tipped as the prime suspect.

Meanwhile, Dede has pledged to give anyone who is able t give him vital information about the stealer of his highly-priced watch.