Cristiano Ronaldo has picked up the Globe Soccer’s Top Scorer of All Time award at Dubai Expo 2020.

Ronaldo has scored a total of 801 goals during his career so far,  having played for  Sporting Lisbon, Manchester United, Real Madrid, Juventus, and Portugal.

On Friday January 28, the Manchester United superstar was handed the gong while on holiday in Dubai at the Al Wasl Plaza having reached the landmark following his fairytale return to Old Trafford. 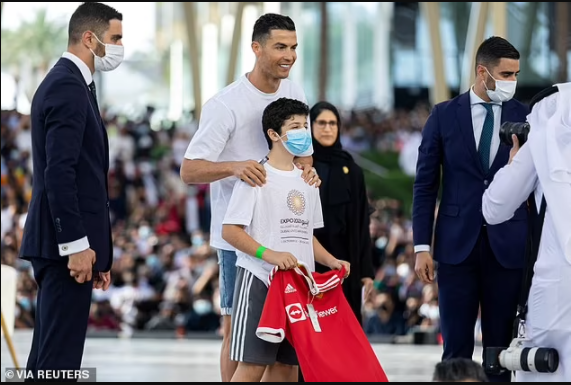 The 36-year-old was greeted by hundreds of supporters who had turned out to catch a glimpse of the superstar at the ceremony.

Ronaldo is spending the international break in Dubai with his family and was seen celebrating Georgina Rodriguez’s birthday at the World’s tallest building Burj Khalifa.