Four new cases of the deadly Coronavirus Disease (COVID-19) have been confirmed in Ghana’s Upper East Region, the Regional Health Directorate has announced.

This brings the total number of cases recorded in the region to eight.

Of the four new cases, three are contacts of the first confirmed case, while one is a detected case through routine surveillance in the Bawku Municipality.

Health authorities in the region in a statement said “laboratory feedback was received today, Thursday, April 16, 2020. Out of the four cases, three (3) are contacts of the first confirmed case and for the first time, one (1) of the cases was detected through routine surveillance in the Bawku Municipality”.

The statement added that “unfortunately, the case in Bawku passed on before the laboratory results were received from the KCCR, however being a suspected case burial was appropriately supervised”.

It said steps have been initiated to communicate the results to the affected persons and to immediately identify contacts of the four new case for immediate quarantine.

READ  Smokers are at high risk of coronavirus infections - VALD

The statement commended the public for the cooperation in the fight against the disease and called on all to remain calm and observe the precautionary measures as health authorities work to bring the situation under control. 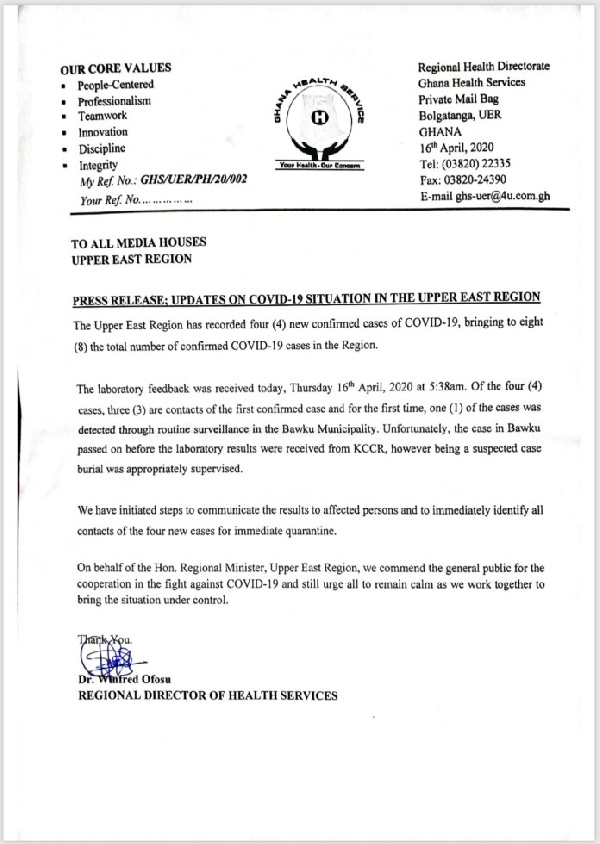 African evictions: We would not want to reciprocate, be warned –...

It’s Been 10 Years Wizkid Released His First Single ‘Holla at...

Stop Sleeping With Your Friend’s Girlfriend and Get Married – Afia...