The Ghana Police Service has killed two of its own men who had earlier been arrested in connection with some bullion van heists in the country.

The police also arrested four other policemen during its intelligence-led operation at Borteyman near Ashaiman in the Greater Accra Region, in connection with its ongoing investigations into the robberies.

In addition, one civilian suspect was arrested.

However, the police said in a statement dated Tuesday, 8 March 2022 and signed by the Director-General of Public Relations, DCOP Kwesi Ofori that five other suspects, all civilians, got away with bullet wounds.

The arrested suspects are to be arraigned today, Wednesday, 9 March 2022.

“During the raid at Borteyman, near Ashaiman, there was an exchange of gunshots and two policemen, No. 58284 Constable Reindolph Ansah and No. 53549 Lance Corporal Stephen Kwaku Nyame, who had been arrested in connection with the bullion van robberies, were shot and were pronounced dead on arrival at the Police Hospital where they were rushed for treatment”.

“Some other suspects believed to have sustained gunshot wounds managed to escape the scene”, the police said.

“Further investigations have led to the arrest of five other suspects, four of whom are policemen”, the statement noted.

“We are pursuing five other civilian suspects who have gone into hiding”. 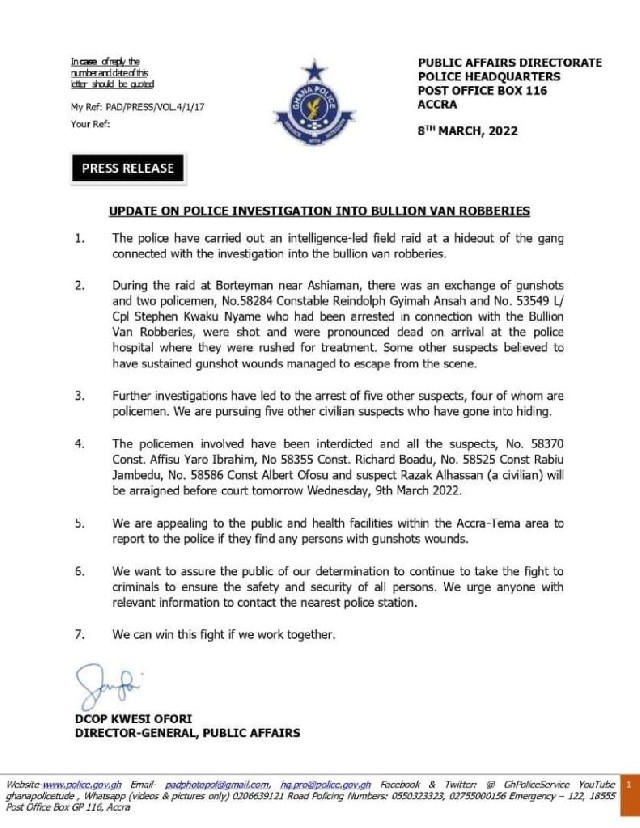