What if the Sony Xperia 1 III went to school and got a degree in filmmaking? No need to wonder – it would become an imaging professional. It would become the Xperia Pro-I.

Sony has a habit of making phones no one expects, and no one has thought to ask for. That’s how the Xperia Pro came to be. The Xperia 1 II’s ultra-expensive alter ego was meant to be used as an external monitor for Sony Alpha cameras… and it also happened to be a phone with 5G connectivity.

The Xperia Pro-I, on the other hand, is not an accessory, it’s the main act – the phone is the camera. Inside the Pro-I, Sony fitted a 20MP 1.0″ Type sensor, and it’s the first one this big with phase-detect autofocus on a phone, they point out to get that Sharp out of the conversation. What they don’t explicitly mention is that the Pro-I isn’t using all of it – just 12MP, but we’ll elaborate on that later on. The point is – great main camera chops.

The other cameras aren’t all that special but complete a capable tri-set. There’s an autofocusing ultrawide that’s at the reasonable end of the ‘ultrawide’ spectrum instead of the extreme. As for zoom, gone is the dual focal length periscope of the Xperia 1 III, replaced on the Pro-I with a more modest 2x-only unit.

The rest of the internals are almost entirely straight from the Xperia 1 III. The Pro-I reuses that one’s 120Hz 4K display, the Snapdragon 888 is doing the calcs (not the plus, not that it matters), the battery is the same too.

The Pro-I does take its own unique path when it comes to design, but we’ll talk more about that on the next page.

The Xperia Pro-I arrives in an unassuming white cardboard box – certainly nothing that hints at the $1800 worth of phone packed inside. There is a splash of gold that accents the Pro-I inscription on the lid, and that’s as far as the flair goes. For what it’s worth, there’s zero plastic used for the packaging. 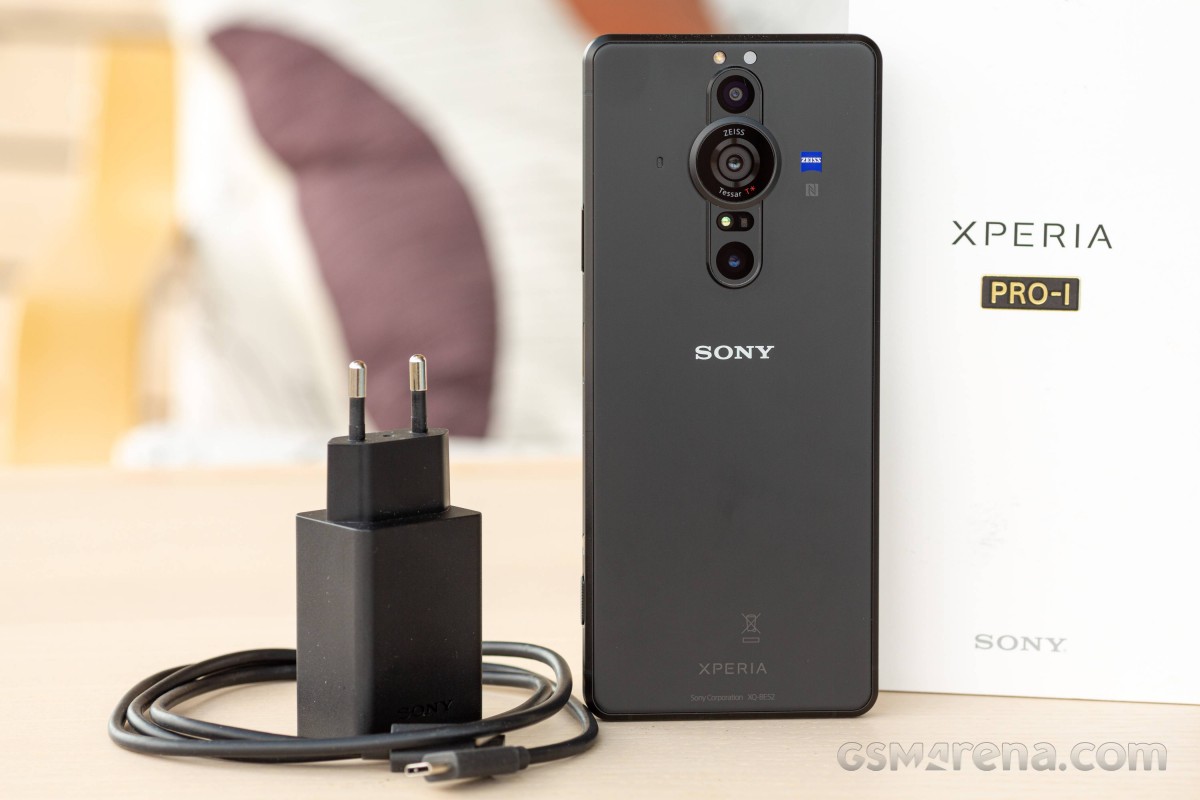 The contents aren’t lavish either. Aside from the phone, you’re getting a 30W charger and a USB-C cable, and that’s it.

There are a couple of accessories that are optional and can be purchased at an extra cost that complement the Pro-I in its pursuit for camera greatness. Those include a grip – previously available and compatible with the company’s current lineup of standalone cameras, and a newly-launched vlog monitor that you can use as a viewfinder to record yourself on that 1.0-inch main camera. Here’s a glimpse of those, but they’ll get their own page too later on. 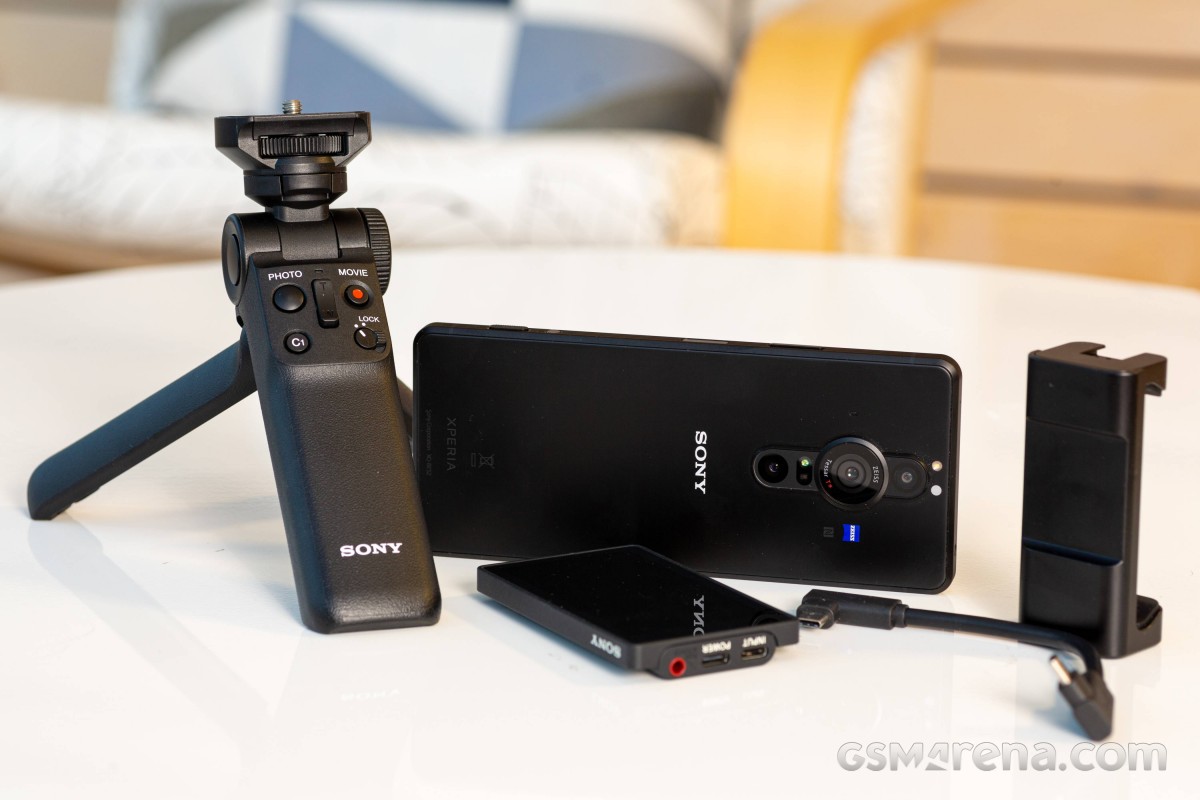 First things first – let’s talk about the Xperia Pro-I itself.

It sure looks like no amateur, the Xperia Pro-I. A single colorway – classic black, a frame that’s all about grip and controls, plus an all-but-forgotten safety feature, and then a matte back with tons of camera hardware along the center axis – this imaging pro has an understated ‘I mean business’ presence.

The business side is the back – that’s where the sort-of 1.0-inch primary camera is. You’ll easily recognize it by its oversized ring, Sony made sure to make enough room for a ‘Zeiss Tessar T*’ branding, but oddly missed pointing out it can change the aperture. But it makes sense, in fact – pros don’t brag.

Having said that, the Zeiss logo beside the camera in addition to that Tessar mention might be considered bragging, but we’ll allow it.

Opposite the blue badge, there’s an opening for a mic. You’ll be using that one for vlogging on the rear camera unless you trick out the Pro-I with an external mic on top of your other vlogging accessories.

Below the main camera is the 3D ToF camera that helps with autofocus in the dark. Underneath that is the relatively modest 50mm-equivalent telephoto while the ultrawide is at the top. These ‘secondary’ cameras are raised up a bit from the back but not quite as much as the 1-inch star of the show. 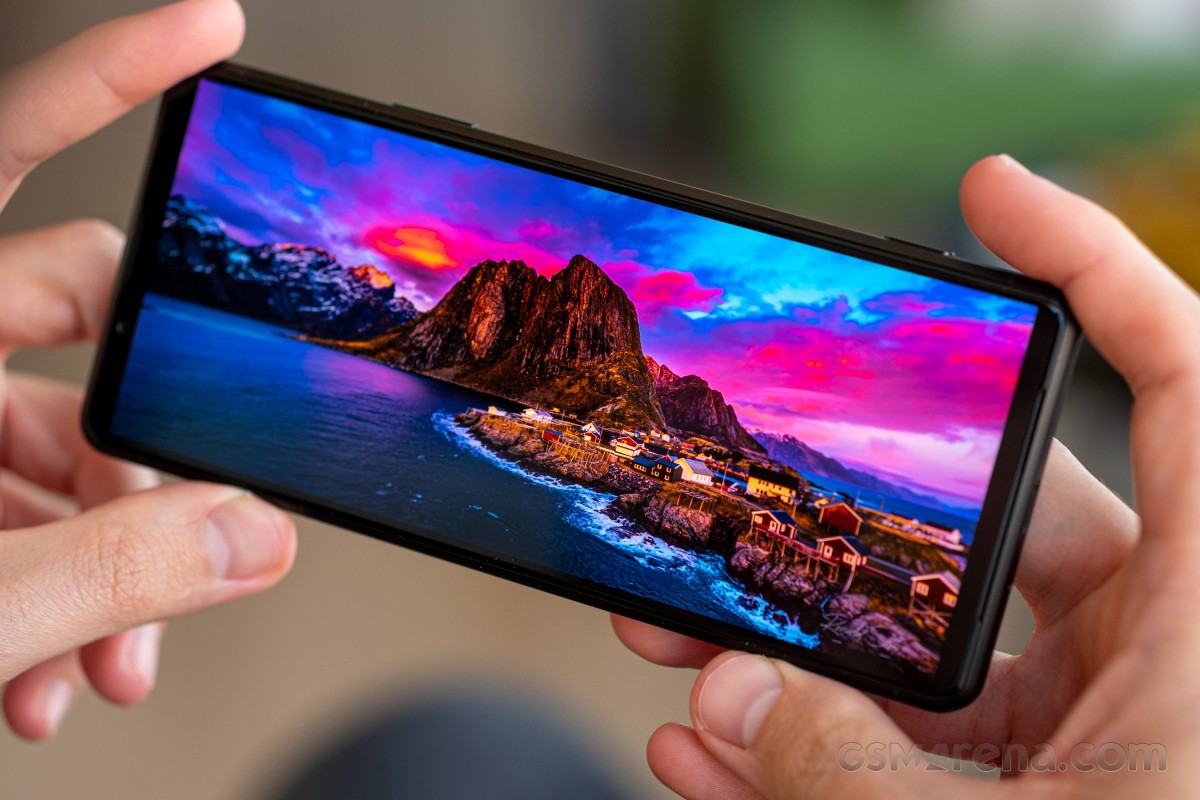 The Pro-I measures 166x72x8.9mm, a millimeter extra in the X and Y directions when compared to the Xperia 1 III – the meatier frame here can take responsibility for those. It’s certainly a tall phone, but it’s a relatively narrow one, so you can easily reach across, though the top is obviously out of bounds unless you use both hands.

The 211-gram weight is about right for what it is; it’s certainly not too heavy. If anything, the Pro-I is lighter than average – other camera-centric offerings like the Galaxy S21 Ultra and the Mi 11 Ultra are in the 230g ballpark.

How To Hide Apps On Android…